What a wild wonderful weekend!

No, not because the Easter Bunny came, but rather because of a trip to Eastern Idaho and the fun that my wife and I had visiting family that I don't get a chance to see very often, a wonderful family history quest, and teaching at the BYU Idaho Rexburg Area Family History Conference.
The weekend started off visiting an aunt in Blackfoot .  We had a good time catching up with her during the nice lunch that she had prepared.  We talked about each of our families and showed her pictures from our photo collection on my laptop. (Wonderful not to have to carry around all those photo albums, isn't it?!)
We then stayed that night near Idaho Falls with a cousin that I haven't seen in quite some time, but yet was very close to while growing up.  This cousin and her family are also caring for our 95-year-old grandmother and it was fun to talk with Grandma even though the conversation kind of had to follow her memory and train of thought as it moved through various time periods and recollections.   She has had a very full life and we shared some memories.  My cousin and I were able to also remember some stories from our times together and with Grandma.  We each got misty-eyed as I showed her my blog and family history site and she read my St. Patrick's Day post about Grandma and the four-leaf 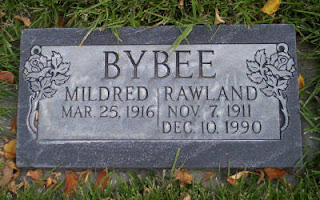 clovers.   She let me know that she had found a great uncle of ours buried just down the street in the Ammon Cemetery, and I was able to get a photo of their gravestone marker.
We also talked about some information that I had found about our GG Grandfather - Thomas Elliott, that no one in the family had been aware of until I discovered a reference in a photo that I was scanning from Grandma's collection.  I'll write more on that when I get  chance to gather some additional details during a future trip to the area.