I had actually intended to write about my 3rd Grandfather - Noah Blankenship Crouch - a couple of weeks ago as part of the kickoff to the 150th Anniversary of the start of the Civil War, but didn't get a chance to, so now I am participating in the Military Monday blogging prompt.
His pension file is special to me because it was the first one that I ever ordered several years back from the National Archives and was amazed at the amount of information that it contained.  I am now looking forward to seeing the actual documents when I have the pleasure of attending the National Institute on Genealogical Research this July and will make my first trip to the National Archives. 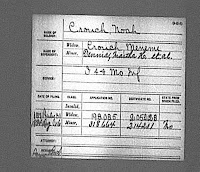 To start with, I had no idea that he had served in the Civil War.   He and wife were one of the "brick walls" that our family had encountered in researching the family tree.
It wasn't until I finally found his wife and children in the 1880 census with a new husband and stepfather, that I began to wonder what happened to him.  I then realized that based on the time period and the fact that he had been in Missouri, it was possible that he had been involved in the Civil War.
Finding his entry in the index on Ancestry.com, and with his wife's fairly unique name I was able to see that he served in Company I, 44th Infantry Regiment of the Missouri Volunteers. With this information I was able to order his military pension file and find out many more details about him and his family.
He joined the military effort in September of 1864 and fairly quickly developed gastrointestinal issues that lead to his disability discharge in May of 1865.
The pension file papers then provided more details about these health issues that plagued him until his death in 1870.

These details then lead me to find a picture of his headstone on findagrave.com where he is buried in Deeds Cemetery, Sullivan County, Missouri.
He didn't serve a great deal of time during the war, but like so many individuals and families, was affected by it for the rest of his life.
I often wonder how his life may have been different had he had access to some of the medicines that we take for granted today.
I also am immensely grateful to the companies, societies, archives, groups or individuals that give us the tools and content that we need to discover these details about our ancestors and come to understand them as more than just names and dates.