Tuesday was the first day we would have some free time to do some research at the Archives and so I had prepared some record pull requests that I was able to get in for the first pull at 10 am.  When you have records where you are looking at original documents and not microfilm, books, etc., there are set times where you can have those records pulled which can take about an hour to get back, but they will hold for a few days for you to look at when you can.  I knew that I most likely wouldn't have time to look at them that day, but would look forward to seeing them later. 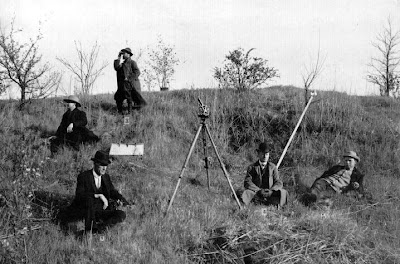 When class started up later that morning we were treated to another visit by Claire Bettag for two sessions in a row.
The first covered Federal Land Records in general.  She taught us that, "Many of NARA's land records are valuable to genealogists - among them, the Land Entry Papers, which document the first transfer of title of public land to private ownership, Surrendered Bounty-land
Warrants, and Private Land Claims."   She then reviewed which states are the "public-land" states whose records would be included versus those considered "state-land" states not included in federal records.   We learned about the processes involved and how the various land was recorded and tracked through various changes in laws, how the parcels were divided and the types of case files involved.  There was a lot to take in, but we weren't done yet.

Next came a session on Bounty-Land Records where "from 1788 to 1855 Congress authorized land bounties to reward veterans for military service or to attract enlistments. Those initiatives produced records preserved at the National Archives and Records Administration (NARA) that can be valuable for genealogists."  These two records groups - Bounty-land applications submitted to the government by veterans wishing to obtain veterans' benefits, and surrendered bounty-land warrants - exchanged at land offices for land, were the topic of discussion for the next hour.  I think most of us were ready for lunch to give our brains some time to process it all. Whew!