Before you get too excited thinking this was a recent event, let me say up front that it happened nearly 9 years ago, on 9 June 2003.  However, I recently ran into some information on the Google Maps Mania blog that talked about some ways to use google maps in conjunction with weather data from the past. I thought it would be interesting to see how I might use these maps and charts to enhance a story from my family history.
The blog refers to the following two sites:

I decided to take this weather event, that granted, for some of you in tornado prone parts of the country is very minor, but for us out West isn't something you see very often at all, especially right in your own back yard.

It all started as a fairly large thunderstorm started rolling into our area. It was late in the afternoon and I was as work and my wife was at home.

By going onto either of the websites and setting the various date and time details you can get a picture of what the storm or event looked like coming into our area.
There are many options for radar, temperature, etc.
(The arrow is the storm direction and the marker in the red circle is our town - added in Skitch)

This storm spun off a small tornado that hit just in front of our house, went through the fence and then jumped over to another street before leaping over a neighboring town and going down the main street of another.

My wife said that after hearing what sounded like a train rushing by, she looked out and saw our young daughter's playhouse lifted a few feet off the ground and our fencing just explode. It also broke some trees and threw our next door neighbors trashcan into their garage door, denting it significantly. Luckily no one was hurt and many of our neighbors weren't even home.

The neighbor's house behind and  below ours ended up with fencing pieces scattered all around and their swingset was tossed upside down.

After calling me and telling me what happened, my wife called the news channel and they sent a crew down. She was interviewed and they filmed us picking up the pieces of fencing. Yep, our 15 minutes of fame.

An amazing part of this story - something that we had heard about happening in tornados but had never experienced first hand -  a piece of the fencing was  thrown into another neighbors roof embedding it about a foot.  See pictures at the bottom of the post.

We if course took many other pictures of the damage, but as I thought about how I might add to the story using these websites, I then created another map that shows the storm after the tornado had passed by.  I next created an interesting chart showing the drop in temperature in a matter of minutes as the tornado hit. I thought this was a fun way to add details to this weather event in our family using this new online technology. 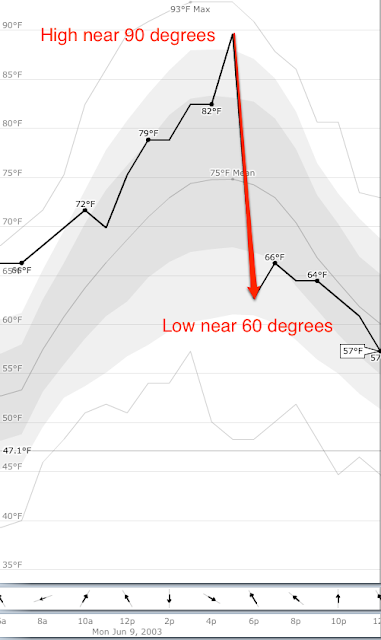