Since I have been so busy running around as the SLIG AV Nerd and taxing my brain while in class the rest of the time, I decided to just put together a brief overview of both Wednesday and Thursday classes. 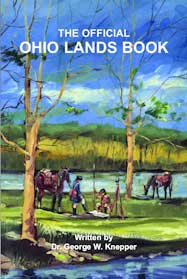 Wednesday started with Josh Taylor giving us a rundown on the New York's Land Companies and their part in selling land in New York to New Englanders heading west after the Revolutions.  It was interesting to me how many land companies were involved and where their records might be found, including even back in Holland. Then, much like now, much of the land was purchased on credit and the depression of 1819 caused many to have to end up either giving up their land or their crops to pay for it.

Then Richard G. Sayre filled us in on Ohio and Pennsylvania land records. As part of the class he told us about a book entitled - "The Official Ohio Lands Book that is available for free as a pdf through the stand auditors website - http://www.auditor.state.oh.us/studentcenter/default.htm

You gotta love free!  Let me tell you that this should be very helpful since Ohio was such a patchwork of more than twelve tracts and districts as it was used throughout the expansion of the country supervised under both state and federal governments.

Pennsylvania lands aren't nearly as convoluted, yet they still have a complicated history involving Sweden, The Netherlands and England all creating settlements prior to William Penn coming into the picture. Therefore one must understand where the records are found for the different time periods involved and under what rules they were created.  The site http://mapsofpa.com makes many maps of Pennsylvania available online to assist in ones research.

Craig R. Scott then covered "Bounty Land: Colonial and State". USLegal.com defines bounty land as "a grant of free land from a goverment given to citizens as a reward for service to their country, generally for military-related service."  Craig explained how bounty land actually started in Rome where Caesar granted land to his armies in lands that they conquered. Colonies and States later mimicked this because they felt that people could then help defend the lands that they were given.

Our next class was "Military Resources: State and Local Archives" taught by Paula Stuart-Warren where she discussed the various records that might be found in many different archives. She also recommended the book "U.S. Military Records: A Guide to Federal & State Sources, Colonial America to the Present."  Realizing that I didn't have this book, which sounded very interesting, I jumped on my iPhone and quickly searched for it on several sites. I then purchased a used library copy through Amazon.com's marketplace for $3.99.  A much better deal than $26 for a new copy.

Thursday began with Paula Stuart-Warren teaching us about  "Manuscript Sources, 1780-1840". In doing so she had us searching on a few of the websites like archivegrid.org to see the many types of things that are contained in these collections.

Josh Taylor then went through "Resources of the DAR: Beyond Revolutionary War Soldiers.'  Even after my trip to the DAR museum a couple of years ago, I still learned a few new ways to use their resources from out discussions. Several people in class were very involved in the DAR and had some insights about their records that were very helpful.

What a great learning opportunity it has been to learn from these great instructors!  It is hard to believe that it's almost over.